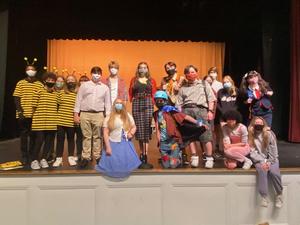 Glynn Academy’s one act team hopes to offer some comedic levity this week to anyone seeking an outlet through the theater.

The students invite the community to come see their most recent show, “The 25th Annual Putnam County Spelling Bee,” at Glynn Academy’s auditorium Tuesday through Friday at 7 p.m. Tickets are only available through the pre-sale and will not be sold at the door, to limit crowds.

The musical comedy is about a day at the spelling bee and includes an eclectic cast of characters who each bring their own distinct personalities to the show.

“Each character has a super unique personality and back story, and everybody sings a song about themselves,” said Eli Waters, a cast member in the show. “And it’s just about one day at the spelling bee and the shenanigans.”

The students have devoted significant time to preparing for the show, and the showings this week will help them prepare for the upcoming Georgia High School Association One Act Competition.

“I think probably the hardest part, and the most fun for us, is playing roles like this,” said cast member Sophie Willis. “Some of us are 18 and 17 year olds playing 8 and 7 year old, and we take a lot of time outside trying to realize what you did that age and how you thought through every process and everything you did.”

“One of the best parts of the challenge is not only memorizing all of the steps, dances, songs, lines, but also memorizing this crazy character that we all have and then every single person doing exactly what they’re supposed to do all at the same time for an audience with no mistakes,” said cast member Lily Seemann.

The students promised that they show has humor for all ages.

“Every age would enjoy this show,” said Jack Slade, who plays Leaf. “There’s jokes for everybody.”

The comedy will offer an escape from the harshness of today’s realities, Lofquist said.

“It’s like a relief,” he said. “Through all these hard times, it’s a way to get away from your real life. Everybody’s been missing the theater. We haven’t had shows in a while. It’s comedic. It’s really trying to make your brighter through these hard times.”

Everybody in the theater will be sitting in a socially distanced manner, and there will be limited seating each night. Masks have to be worn throughout the entire performance.

The students encouraged the community to come out for the show.

“If you’ve seen the show, you haven’t seen GA Players do it,” Lofquist said.

Tickets can be purchased online at at gaplayers.com.