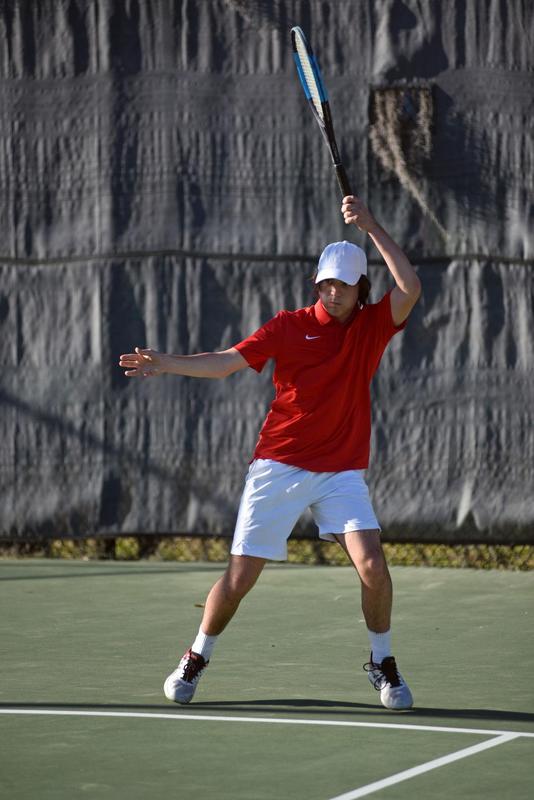 The Glynn Academy tennis teams kept their perfect Region 2-6A records intact ahead of this weekend’s Jekyll Jam by sweeping matches against Bradwell Institute on Tuesday at the GA tennis courts.

Both the Terrors’ boys (3-0, 2-0) and girls (2-1, 2-0) recorded 5-0 wins against Tiger programs that were forced to forfeit the two points from doubles competition.

“It’s been good to kind of get off to a good start in region, and just have the opportunity to kind of go out there and kind of see where everybody is in terms of us,” said Glynn Academy tennis coach Marcus Long.

The most competitive match of the day occurred at the boys’ No. 1 position where David Thompson fought off his Bradwell counterpart to pull out a win in the decisive third set 7-5, 3-6, 10-7.

But the three Glynn boys at the top are just a taste of the team’s depth.

“On the boys’ side, we’re just so balanced,” Long said. “We’ve got really good balance in our lineup this year. I think we’ve got a lot of guys that are not starting for us that would start for a lot of other teams in this area.

“To really have a deep roster, that’s been great.”

Although the Terrors’ girls don’t have the roster of year’s past after graduating all-region honorees Florence Thompson, Maizy Davenport and Yanin Reinholz, Long has been impressed with the team’s gritty nature.

“On the girls’ side, we’re not as deep as we have been; we’re not as experienced, and that’s something Paul Rash, my assistant coach, and I have been talking about,” Long said. “Our girls are not the most experienced in the world, but they will fight.

“They are as competitive as can be, so we’ve been real pleased about that as well.”

Glynn Academy will get its first major test of the season Friday when it competes in the Jekyll Jam Tennis Invitational, hosted by LaGrange on Jekyll Island, and featuring a field that includes: Savannah Country Day, Effingham County, Jackson County and Athens Academy.

Glynn’s boys and girls are scheduled to face Athens Academy at 2:15 p.m. before matching up against LaGrange at 4:15 p.m. One more match will be played Saturday based on the Day 1 results.

“To be able to have some good competition, it kind of gives us a little bit of a measuring stick to where we are,” Long said. “There’s actually another team in the tournament this year that’s in our region, so it may give us a chance to get an early look at Effingham County as well.

“We kind of see it as a good opportunity for us, and we’re looking forward to it.”