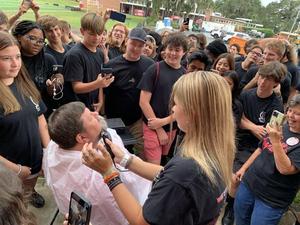 So it was little surprise to him last week when the Glynn Academy marching band celebrated a major milestone in their annual fundraiser by helping shave their band director’s signature beard.

The marching band is selling its restaurant discount band cards to raise money for equipment, uniforms, travel and competition fees. The cards cost $20 and offer 10% off at 70 restaurants in Glynn County.

The overall goal is to sell 3,000 cards. Duke promised to shave his facial hair if the band members surpassed the 2,500 mark and to shave his head if the final goal is reached.

The discount card sale is a longstanding fundraiser for Glynn Academy’s band, but this is the first year Duke has offered such an enticement for high sales.

Funds raised through the annual sale not only support the band’s operations each year but also go toward scholarships for band students.

“It’s really for a great cause all the way around,” Duke said, noting he’s never seen the students sell this many cards.

Holden Couturier, a sophomore drum major in the band and one of the top three card sellers so far, said Duke’s encouragement inspired him and others to go above and beyond this year.

Like many students, he goes door to door to sell the cards, with a pitch that’s simple and effective.

Community support goes a long way for the band, he said.

“Having those donations actually allows us to do what we do,” he said. “And you get to save money on every single purchase at some of these places.”

His mom, Cindy Couturier, is among the group of parents who helped coordinate the fundraiser. She said the students were motivated and organized as they set about selling the cards after band camp this summer.

Businesses that contribute to the initiative also stepped up to be supporters of the band, she said.

“They commit to 10% off their sales for a whole year, which is a huge ask,” she said. “With all the labor shortages and food costs and COVID, it’s really very meaningful that they would step up and support the band.”

The fundraiser will continue through the start of October. Anyone who wishes to buy a card can email [email protected].